The Sacral Space of the Rabí Castle

The Short History of the Church
The castle church, the Holy Trinity Church, was probably founded in the 14th century but it was consecrated in 1498 (after its completion by Půta Švihovský Lord of Riesenberg).
The castle church kept basically its Late Gothic form although its external appearance was changed in the following times (the sacristy was built in the 17th century, the entrance hall and the ridge turret were added in the 18th century). More significant alterations touched the church interior of which appearance was supplemented and changed several times and so in the 20th century inside of the Holy Trinity Church there were found the illustrations of almost all art styles, starting from the Gothic style and ending with the Art Nouveau.
The castle church fulfilled its elementary function until 1970 when it lost the status of the parish church. At the end of 1970s the church was deconsecrated. After that it was left to its fate and begun to fall fast into ruin.
The better times came after 1989. The rafters and roofing material were replaced by the new ones, the external facade was renovated and part of investment was aimed at the restoring of movables.
Nowadays the castle church itself is unfortunately closed for public or rather in the summer the basement of the church is opened and used as an exhibition hall.

Interior of the Church
The castle church is made by one nave and a five-sided chancel. The nave and chancel have a mesh vault. The chancel is ended by a simple triumphal arch which is considered as one of the oldest part of the castle church. Opposite the triumphal arch there is situated a choir loft which is supported by prismatic pillars. In the north-western corner there stands a spiral staircase which leads to the choir loft and to the loft of the church.
In the nave there are two windows and in the chancel there were broken five windows. All windows have granite moulding and their appearance is in accordance with the Gothic style. The former entrance is situated into the western wall and is decorated with a saddle portal (this stone portal is nowadays covered by the modern entrance hall).
The colour wall and ceiling paintings are tightly connected with the interior of the castle church. Older coatings of the plasters were revealed by restoration research (more precisely, in the chancel there was revealed a part of the Gothic fresco with the theme of the crucified Jesus Christ; in the entrance hall heraldic motifs). Part of the church walls is covered by the Late Baroque mural. But the frescos in Art Nouveau style from 1907 cover most of the area of the church walls: in the nave there are stylized ornaments; in the chancel figural motifs (the Holy Trinity is surrounded by the Czech saints and patrons).
The armorial gallery of Riesenbergs is striking. This gallery is made by fourteen coats of arms on the keystones. Those coats of arms present two genealogical lines of the family of Riesenberg: the first one reminds of the family relations of Jan Lord of Riesenberg; the second one relates to Půta Švihovský Lord of Riesenberg and his relatives. The former, medieval coats of arms were in the Early Modern History added by the coat of arms of Counts of Lamberg and the coat of arms of the town of Rabí.

The Medieval Movables of the Holy Trinity Church
It is known that the main altar was consecrated to the Holy Trinity and it was composed of coloured and painted wooden sculptures. The great sculptures of God the Father and Jesus Christ were completed by the tiny sculpture of the Holy Spirit (by the tiny wooden dove).
On the left side of the castle church there stood the wings-altar of Saint George (the so called “Rabská archa”). On the right side there was the altar of Saint Anna. The first mention altar still exists; the only sculpture of Saint Anna is preserved from the second one.

The Modern Appearance of the Church Interior
The modern main altar founded in the 18th century. Its form corresponded to the Baroque style: the painting The Coronation of the Virgin was inserted into the centre of this altar and this picture was surrounded by gold-plated sculptures of some saints and of cherubs and also by gold-plated ornaments.
The left side altar was consecrated to Our Lady of Sorrows; the right one to All Saints. To the Baroque movables belong also the pulpit which was decorated by two carving of Four Evangelists, the organ, pews and the stone poor box. Moreover the church equipment was comprised of lots of fine objects.
Nowadays there are no movables in the castle church; all objects were transported to the depository of the National Heritage Institute in the 1970s.

This altar belonged to the church equipment till the end of the 19th century. In this time the altar was given as a gift to the National Museum in Prague. This institute is till now its owner even though the altar itself is constantly lent to the National Gallery in Prague. 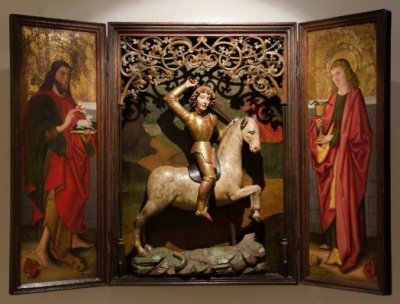 The Altar of All Saints
In the Baroque epoch the right side altar was consecrated to All Saints. The appearance of the wooden reredos resembled a small chapel and its artistic arrangement corresponded with the main altar: the polychrome gave the impression of the marble; there were also columns or tiny statuary. In the centre of this altar there was situated the Votive painting of Johann Heinrich Dlauhoveski and his wife Barbora which was created in 1637 and depicted Our Lady with Saint Barbara, Saint Philomena and group of Saints. 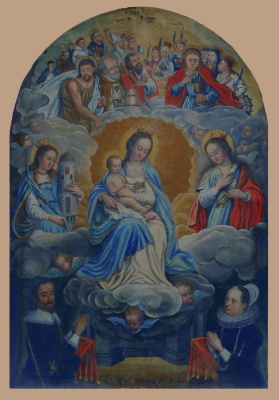 This link leads to a page which, sadly, isn't available in your language. Do you wish to continue?